BlackBerry Z10 innovation, features were worth the wait 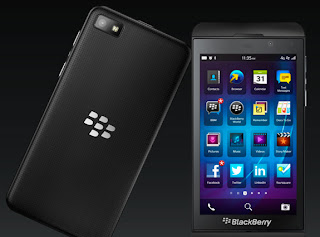 I've never been as excited about a FedEx delivery as I was for the package with the BlackBerry Z10. It arrived from Verizon Wireless in an understated velvet-black box. Now it's showtime.

All the hype about the new BlackBerry was running through my mind — the delays and months of waiting while other smartphones made their debut. The promise of a new operating system based on QNX technology that is also known very well in the automobile technology circles and the nuclear reactors industry. So I'm thinking this device had better be special and worth the wait.

At the first glance, I noticed that the Z10, clad in solid back with a grippy, textured back that almost sticks to your hand, has grown in size to a respectable 4.2-inch display, which makes my iPhone 5 seem small. BlackBerry needed this size increase, as the older models seemed to stuck in the past, much like the earlier iPhone devices were for several years, while the competitors rocketed past them in width and height.

The Z10 has flexed its muscles by being a couple of millimeters taller than the iPhone 5 at 5.12 inches, but falls short of the Samsung Galaxy's S III and the HTC One, which are both at around four inches when standing tall. The Z10 weighs 4.78 ounces, which heavier than the iPhone, but lighter than the HTC One. I imagine the textured back adds a little weight, but it's a good thing, as the Z10 is not slippery in your hands.

A dual-core 1.5 gigahertz processor runs the Z10, backed up with two gigabytes of RAM and a 1800 mAH battery rated at 10 hours of talk time. A micro HDMI port will provide a connection to a HDTV or projector.

While the new hardware has good tale-of-the-tape specs among the competition, this device is all about the new Blackberry 10 software.

The Z10 is not a device that you'll purchase in the morning, spend all day with it and decide you don't like it. That's not enough time to uncover all the goodies and features the new OS has to offer. It's going to take several days and the like-ability will grow each day, as you spend time learning all the "gestures" that controls the new OS.

The touchscreen keypad on the Z10 is now one of the best around. I could type my entire email address with bringing up secondary characters for numbers, the @ symbol and a period. As you compose a message, the suggested words are quite helpful; you just flick them up into your sentence as you type. Somehow, the Z10 knows what you might want to say next, which according BlackBerry, will get smarter and smarter as the Z10 learns your writing style. 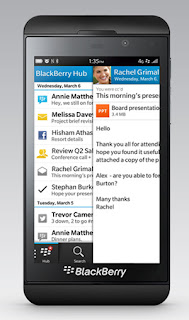 The all-familiar red blinking light in the upper right corner alerts you when a new message arrives. Then the "BlackBerry Flow" feature swings into action and you can follow along me as I flow into BlackBerry Hub interface.

I hit the power button to wake the Z10 and see immediately where the message is coming from by way of a red star on the email icon one one of my social media apps. A quick upward gesture unlocks the display and a couple of gestures to the right gets me to the Hub. Ah, the red star is on the email icon, so a tap opens my inbox and another tap open the message. Another neat feature is how calendar entries appear above the list in your email inbox. Just swipe downward to view what's next on the agenda.

The Z10's multitasking feature keeps several apps open and ready for you to choose at any time. A quick upward gesture will get you to the running apps panel. I predict this feature will show up on other smartphones soon.

Another favorite feature of mine on the Z10 is the "BlackBerry Remember" interface, where you can organize to-dos by color-coded folders. This is pretty common, but the new BlackBerry 10 OS takes it a few steps further by adding the capability to send emails and information from the Web to Remember folders. So, the BlackBerry becomes sort of like a Evernote or a general repository for various tidbits of information that can be acted upon later. Tags and voice notes can also be added to the notes to make the easier to find later.

Just being able to turn emails into a to-do or action item can be a powerful productivity tool for enterprise users. I know of other productivity applications that are designed around this feature alone, as well as clipping notes from the Web browsing.

I am off the corporate email grid right now and was unable to try out the full email capabilities, but the Z10 did a good job of managing my Hotmail account. I just to had to remember to make sure I'm logged in to receive the latest emails. But some early adopters are reporting problems with setting up their business email accounts.

As the Near Field Communication, or NFC, technology continues to emerge, BlackBerry has embraced it with useful capabilities built into Z10. Although just a tap will transfer information to another NFC-enabled device, I found the use of custom tags to be the most interesting. The Z10 has a Smart Tags app, which can save information from NFC tags that you encounter as well as create custom email or text messages to be sent with a tap, such as "I'm in a meeting, will call you later." I see this as being another useful tool for business users.

The Z10 is chock full of innovative features, such as the "video with screen share" and the unique "camera with time shift" to capture the best moment from the eight megapixel camera. You'll need to spend some time learning about this device and just exploring to really appreciate all it has to offer. Just knowing which direction to swipe your finger to accomplish something is a good start to mastering the Z10.

I spent a few days waking the Z10 by hitting the power button until I learned to swipe upward from the BlackBerry logo at the bottom of the display. A two-finger swipe from the bottom shows the keyboard; a long press on the space bar or two-finger swipe downward hides it. For the Hub, swipe upward from the logo, then once or twice to the right. There are numerous other navigation tips; too many to mention here. For new Z10 owners, you have some learning to do.

The Z10 is intuitive and innovative, but also challenging. But I would ante up around $200 for this device if I was smartphone shopping. It's the best of all the BlackBerry devices I've had experience with and finally, thank you, thank you, it has an excellent Web browser based on the HTM5 interface. I don't even miss the infamous roller ball or scroll wheel from earlier devices.

As for apps, the Z10 launched with around 70,000 apps available and the latest count is around 100,000. As a BlackBerry apps developer, I need to get busy and submit something to the BlackBerry App World. But I'm sure a quick search will turn up some of your old favorites, such as BlackBerry's rock-solid Password Keeper.

The Z10 is currently available on Verizon, the source of my review device, AT&T and T-Mobile . If you're a die-hard BlackBerry fan and must have a QWERTY physical keypad, I hear the next model of the BlackBerry 10 devices, the Q10, is due in a few months.

In the meantime, the Z10 is my thumbs-up device. I can say it was worth the wait.