PayPal is letting the numbers tell mobile payments success in 2012 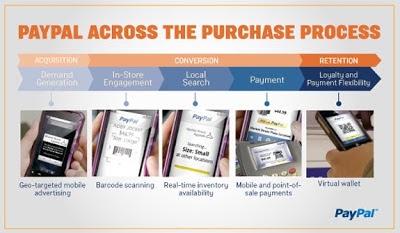 PayPal likes the numbers coming from their 2012 balance sheet. The online mobile payment company is reporting $14 billion in customer payments, compared with a projection of $10 billion for last year.

According to PayPal, during the holiday season from October to December, 692 million payments were processed, making it the busiest three months in the company's 14-year history.

PayPal's growth continues with 123 million active accounts, driven by the addition of more customers in the last three months of last year than at any time during the past eight years.

"To all of our customers, both old and new, I’d like to say thank you...for your loyalty, your enthusiasm and for your valued feedback, said David Marcus, president of PayPal. "We are committed to making 2013 a great year for you."

PayPal has been turning their attention to offline retailers and small business. According to PayPal executives, this market is 17 times larger than the online sector.

They launched "PayPal Here" in March as a mobile payment solution that allows small business to accept almost any form of payment by using a free app and a small credit card reader for the iPhone and Android devices.

The online payment sector will get increasingly crowded, as key players explore banking on NFC, or Near Field Communication, to entice consumers to pay for merchandise and services with their smartphones. Google has Google Wallet, Mastercard has PayPass Wallet and Visa is pushing their V.me digital wallet service.

Apple rolled out their Passbook app with iOS 6 in September, which will organize gift cards, coupons, passes, tickets and more, with the idea of making your wallet a lot thinner and lighter. But Apple has stay away from the NFC technology, while it can be found several iPhone competitors, such as the Samsung Galaxy S III and Victory, the Nokia Lumia devices, Motorola RAZR i and the HTC 8X.

Several of the mobile carriers, including AT&T, Verizon Wireless and T-Mobile, are exploring mobile payments services using the Isis Mobile Wallet, which is underway in Salt Lake City and Austin.

While the mobile payments technology continues to emerge, Paypal is banking on introducing their customers to new ways to shop and pay in the years ahead.