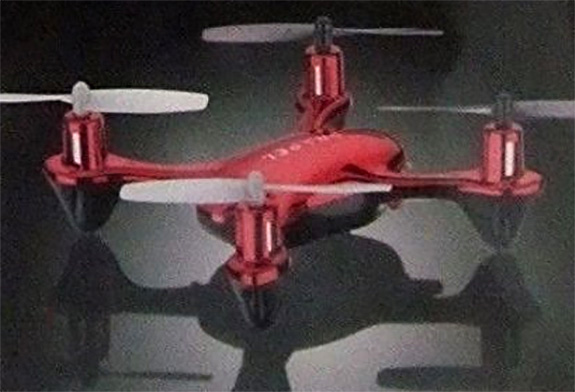 My first drone, the Propel Dart 1.0, found its way into the shopping cart because it was on sale. I never thought I would want a Drone or even like flying a Drone, or let's say “trying to fly” a drone.

The Propel Dart 1.0, my first drone, is about the size of a pack of cigarettes, plus four rotor blades. The technical specs say it’s a 2.4 GHz indoor/outdoor high-performance flying machine with a 200-foot operational range, supported by a 2.4G radio remote controller. Just like its larger cousins, such as a Boeing 747, it has LED directional white lights the front and red on the back.

The Propel company has been in the drone business in the United States since 2006 and recently launched a line of Disney “Star Wars battle drones” with reverse propulsion, flight simulation, an iOS app and gaming for up to 12 players.

For the Dart, I choose the bright red color off the shelves, as I thought it would be easier to see or find in the bushes or a field if my flight pattern went haywire. Or could easily be spotted in the top of a tree, for which I hear stories of this being the final resting place for a lot of spanking-brand-new drones. It also comes in silver and blue.

In the box, protected by industrial-strength plastic packing, I found the Dart 1.0, a Wireless Controller, a USB charging cord, some spare parts and an intimidating instruction booklet for such a small device. Later on, I would appreciate having the spare rotor blades.

Once out of the box, make sure the Dart is charged and ready for action. The drone unit uses a USB connector that “must” be plugged into a computer, which I find odd since it’s not actually syncing to the computer. A red LED light on the USB plug will indicate charging is complete, which could range from 30 to 45 minutes for five to seven minutes of flying time. The controller requires two AAA batteries. 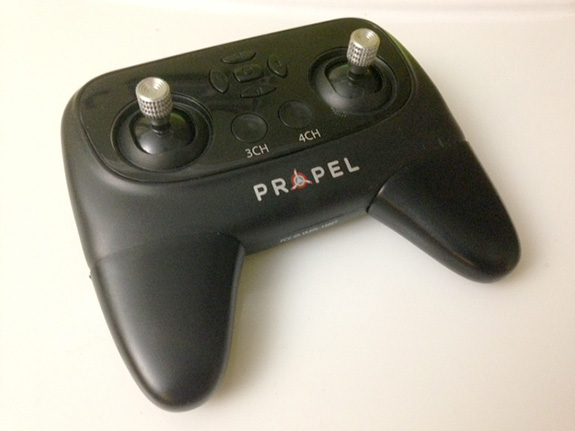 The controller, or remote, is feature laden for such a small device, with controls for adjusting forward and backward trim, as well as banking and the yaw. With the proper adjustments, the Dart is supposed to hover steadily in mid-air with no drifting left or right, forward or backward. There is also a six-axis gyro tucked away inside the device to assist with level hovering and flight.

For beginner drone pilots, like myself, I also appreciated a dedicated Start and Landing button to safely get off the ground and back down again without any mishaps. The Dart has four modes - Training, Slow, Medium and High. I’ll be in (T) Training mode for a while, which allows you to learn to fly at a slow speed. After familiarizing myself with the controls, it’s time to fly.

You’ll need to sync the Dart and Controller before taking off into the wild blue yonder. Just place the drone on a flat surface and activate the throttle lever. The LED lights should turn on, clearing you for takeoff.

Of course, the directions say you should be in a wide open space, with at least a 200-foot radius. I’ll have to settle for my driveway. 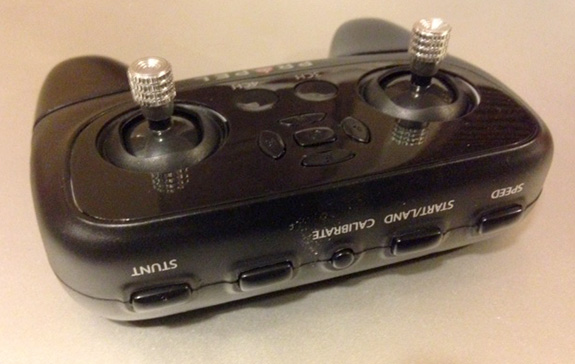 Thanks to the automatic take-off button, I’m off the pavement and in the air in a breeze. With a careful press of the direction lever, I move toward a chain link fence in a controlled manner. Then back to the airport, or my take-off spot on the driveway, followed by pressing the automatic landing button, and the Dart landing softly with everything intact. The rotors automatically shut off after landing. After you build your flying skills and confidence, you can exit training mode, manually start the rotor blades to spinning and lift off using the throttle lever. The challenge in manual mode will be to return at some point and land safely.

The Dart is capable of doing 360-degree aerial rolls, with a dedicated Stunt Roll Button waiting to be pressed once you feel like an expert. It’ll require some quick maneuvering of the control stick to accomplish these tricks.

Although the Dart is considered a toy and can be purchased for around $40, it has remarkable engineering and still falls under the Federal Communication Commission (FCC) compliance rules Part 15 for a Class B digital device. If the weight was above 0.55 pounds, it would need to be registered with the Federal Aviation Administration (FAA) for small unmanned aircraft.

I’m looking forward to purchasing a larger drone at some point with the integrated camera and more features. Or maybe I’ll put a couple of mid-range devices in the Amazon basket to hone my piloting skills a little more before going all out with a DJI, GoPro, UDI, Hubsan, or Yuneec. At some point, I hope to be ready for a Cadillac of drones.

At any rate, I didn’t know I would like a drone, but now I need another one. I’m hooked.