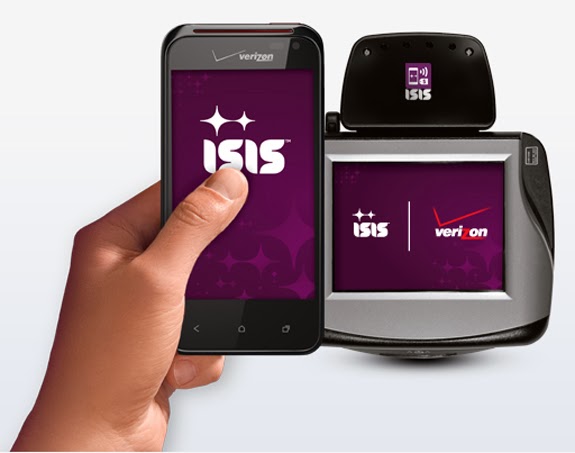 The mobile payments technology just took a big leap forward with Verizon Wireless, AT&T and T-Mobile announcing Isis Mobile Wallet. This "tap to pay" technology can turn many of your credit cards and loyalty cards into virtual versions that will only require a tap at Isis-compatible merchants.

To get started, you'll need one of the 15 Isis-ready smartphones, including the Samsung Galaxy S4 and several Droid devices, with Near Field Communication, or NFC, and an enhanced SIM card. You'll also need the free Isis Android app from the Google Play Store and have an idea of which cards are participating in the new technology, such as American Express and Chase. You'll also have the option of adding money to your Mobile Wallet by linking a bank account or debit card.

The NFC technology on your smartphone will allow an Isis Mobile Wallet short-range wireless communication feature, known as "SmartTap," between the Isis app and the Isis terminal at the merchant. When out and about, you'll simply look for the Isis SmartTap symbol on payment terminals at retailers such as Toys 'R' Us, Jamba Juice, Coca-Cola vending machines. According to Verizon, there are more than 200,000 retail locations that are equipped with tap-to-pay terminals.

For security, your Isis Mobile Wallet account will be protected by a four-digit PIN, and according to Verizon, a Secure Element chip on your phone will store your payment credentials in an area that's separate from your phone's main operating system and hardware.If your device is lost or stolen, the mobile wallet account can be locked by the carrier.

As for privacy concerns, Verizon says on their website that what you buy is between you and the merchants you patronize; neither Isis nor Verizon Wireless keeps track of your purchases.

The online payment sector will get increasingly crowded going forward, as key players implement mobile banking and entice consumers to pay for merchandise and services with their smartphones. Google has Google Wallet, Mastercard has PayPass Wallet and Visa is pushing their V.me digital wallet service.

Apple Inc. has their Passbook app, which will organize gift cards, coupons, passes, tickets and more, with the idea of making your wallet a lot thinner and lighter, but stops short of actually processing a mobile payment. Apple has also stayed away from the NFC technology, while can be found on just about all the iPhone competitors, but was not included in the recent iPhones 5S and 5C.

As an alternative to NFC, Apple has opted for a fingerprint sensor on the iPhone 5S with Touch ID features. Apple also has iBeacon on the drawing board, which uses Bluetooth Low Energy (BLE) technology to transmit wireless data between devices. This technology will also allow iOS 7 devices to pinpoint their location. Some believe this will become Apple's answer for NFC and will offer retailer new ways to reach potential customers beyond mobile payments.

PayPal took a different approach in the mobile payments arena with their "PayPal Here" solution, which launched over a year ago. This concept allows small business to accept almost any form of payment by using a free app and a small credit card reader for the iPhone and Android devices.

According to PayPal, they have been experiencing some success with mobile payments in the offline retailers and small business sector.

As the mobile payments continues to evolve, technology companies will be banking on savvy customers embracing a new way to shop and and pay in the years ahead.