Battery-electric transit buses debuting in Atlanta, bus stops all over

More and more battery-electric transit buses are pulling up at bus stops all over the country.

The Metropolitan Atlanta Rapid Transit Authority (MARTA), one of the largest public transit systems in the U.S., is one of the latest public transportation systems to get on board with plans to add six Xcelsior CHARGE battery-electric forty-foot buses. The Atlanta transit system delivers over 116 million passenger trips per year. The funding for the buses will be supported by the Federal Transit Authority.

The buses from New Flyer of America Inc., a subsidiary of NFI Group Inc., will have a capacity of 40-43 people and a range of around 350 miles with zero-emission. NFI was founded in 1930 and is now a global bus manufacturer. The company introduced its first battery-electric bus in 2012 and now has team members in 10 countries. 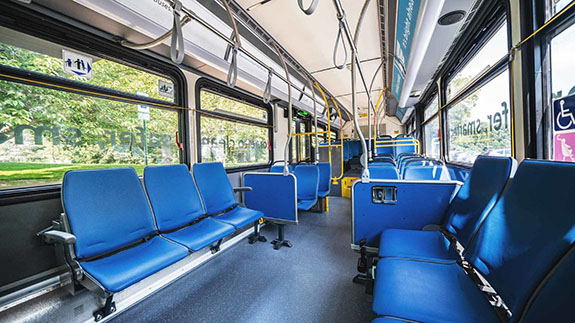 Some of the features of electric buses that differentiate it from diesel-powered transit buses include wider walking areas, Wi-Fi connectivity, USB chargers and the bus being quieter with the electric powertrain and possibly lower maintenance costs. There will be front and rear wheelchair ramps. According to MARTA, these battery-electric buses will support their efforts to “reduce greenhouse gas emissions through sustainable transportation.” The buses will have a life span of 12 years and should save around $400,000 in fuel costs.

Atlanta will be joining several other electric bus fleets across the U.S, including the Orange County Transportation Authority (OCTA) in California, the Westchester County Department of Public Works and Transportation in the state of New York, and an order for 100 Additional Transit Buses for the Washington, D.C. Metro Region. The eastern Georgia city of Augusta is also testing the waters with eco-friendly electric buses.

While the headlines for the emerging electric vehicles technology has been dominated early on by Toyota with the Prius, starting in 2001 and the founding of Tesla in 2003, NFL arrived on the scene in 2012 with its first battery-electric bus. Although the Tesla Model S, also introduced in 2012, might have grabbed all the attention, NFI has been quietly perfecting the electric transit bus technology and delivered its 10,000 Xcelsior-platform electric bus in 2018.

Nowadays, with most of the major auto manufacturers involved in the electric vehicles revolution, New Flyer and NFI continue to move forward with new bus models for the future of the public transportation. According to the company, the automation plans for the Xcelsior AV model will be North America's first automated transit bus.

Don’t be surprised when an all-electric bus pulls up at a bus stop near you. And with the autonomous plans, it might not have a bus driver on board.