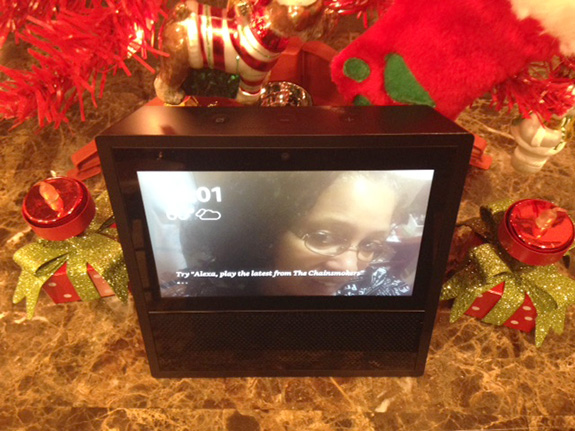 The new Echo Show is a real showstopper

The new Amazon Echo Show was left under the Christmas tree and we couldn’t wait until Christmas morning. This is one fun device and is worth tearing into the box early.

The Echo Show is about as technologically advanced as you can get and does just about everything, plus more things you’ll discover while exploring the many features.

The twist with the Echo Show is that it shows you what’s happening with visuals along with the voice notifications. The previous Echo devices fall short of the Echo Show’s features. Let’s take a closer look at the unique engineering of the Amazon’s latest wonder.

Echo Show: What’s under the hood

The Echo Show is square-shaped at 7.4 inches by 7.4 inches, with a seven-inch touchscreen color display. It tips the scales at around 41 ounces. There is a five-megapixel camera tucked away in the top bezel and blends in so well you might not notice it.

On the top of the housing, you’ll find three simple buttons -- a volume up, volume down, and a combination Mics/Camera/On/Off button.Down low, near the base, there is simply a power port. And that’s it for buttons and ports.

If you look really close around the buttons on top, you’ll see a perforated ring surrounding the buttons that hides with eight microphones with beam-forming and noise cancellation technology to pick up your voice from across the room. I can vouch that this does work from the couch, my hangout, to the table across the room, where the Echo Show hangs out.

If I had to describe it, in a nutshell, it’s an inverted-wedge-shaped powerful voice-commands computer with no keyboard or mouse that always on and ready for your input.

Echo Show ready for action out of the box

Getting the Echo Show up and running is simple and easy. Just take it out of the box, plug it and twiddle only “one thumb” while it connects to the Internet. Alexa will be waiting.

If you’re the least bit familiar with the other Echo devices, such as the 1st and 2nd generation devices, and the newer Dot, Plus and Spot devices, you’ll be ahead of the game in operating the Echo Show. A lot of the things to try are similar, but the Echo Show has lots of new features and tricks to show off.

Just about every feature of the old devices is now visual on the Echo Show, such as the calendar, lists, songs, weather forecasts and the list goes on and on. Book covers are shown while reading Audible audiobooks content, as well as an album or CD artwork for music. Pandora, Spotify, TuneIn, iHeartRadio visuals - they’re all there in full color. If you’re like me and can’t remember the words to songs, the lyrics are scrolling on the display as the songs play on the Echo Show.

Just like some of the earlier Echo devices, the Echo Show continues interfacing or syncing with compatible devices, such as room monitors, lights, thermostats, Philips Hue, Sony and other smart home devices. But since the Echo Show has a display, we can now add baby monitors and security cameras, such as the Amazon Cloud Cam. Pairing with Amazon Fire TV allows access to Amazon Video on the Echo’s seven-inch display. 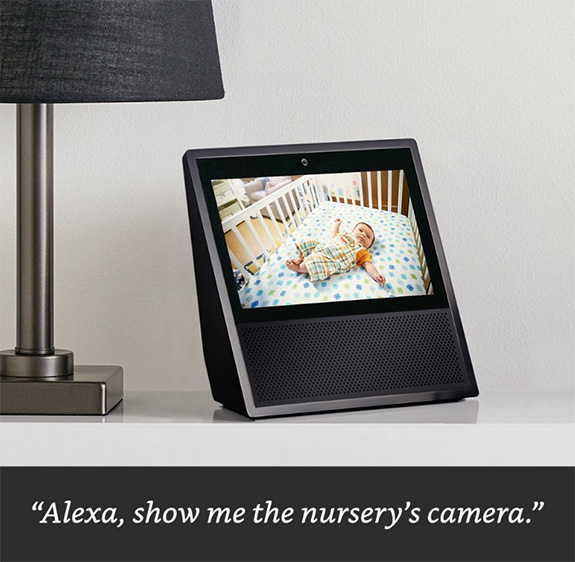 Echo Show redefines “can you hear (and see) me now”

Perhaps the biggest unique feature of the Echo Show is the capability to make video calls from one Echo Show to another Echo Show, using the somewhat controversial Drop-in feature. You can also just call another Echo in the household and use them as an intercom between rooms.

Or you can use the Alex app on your mobile phone to make a Drop-in call to your own Echo Show at home and activate the camera for a makeshift security check from a remote location. Because of privacy concerns, you’ll want to pay special attention to the Drop-in feature and who actually has Drop-in access in your contacts list. The Drop-in feature is very powerful and you’ll want to have a good understanding of how it works.

The Drop-in feature would be great for checking on a sick friend or relative, seniors living alone, children or even the Pets, where you could tell Fido to get off the couch during the day. Yes, you can speak through a mobile phone remotely to the Echo Show, even if no one answers the call.

Other fun stuff includes telling Alexa to “take a selfie” with the camera and asking her to “find free Amazon prime movies,” which can be played on the seven-inch display.

When idle, the display has three rotating screens, which include the current time and temperature, another with the tomorrow appointment from your calendar and the third could be a video trailer, maybe from Netflix, a news headline from The Washington Post or general trivia from other sources. When passing by the Echo Show, you'll have to pause a moment to see what you can learn from the constantly-changing display screen.

The lack of YouTube content for the Echo Show has been an on and off feature as Google and Amazon go back and forth rights and privileges. Lots of folks are hoping Amazon can reach an agreement and have access to the wealth of content available on YouTube. If you ask Alexa to search for YouTube content, she has an answer for you.

"YouTube is not available," says Alexa in a stern voice. "Here is what I found." The latter refers to similar content available from other sources, such as Vimeo and Dailymotion, which also are video-sharing websites.

The Amazon Echo Show is available at you-know-where for around $150 and also can be found at some Best Buy brick-and-mortar stores. I purchased the last one on the shelf at my local Best Buy.

Just like my conclusion in the Drone article, I didn’t know I needed an Echo Show until I got one. I thought the tall guys, the 1st Generation, and 2nd Generation Echo devices met my needs. But the Echo Show is such an impressive technological device, I need another one. It looks like I'm hooked again.


Echo Spot: A stylish and compact Echo with a color screen