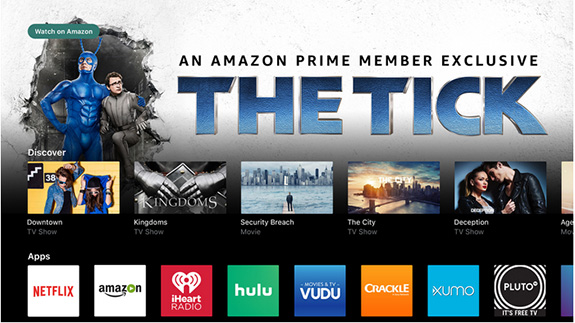 Find the TV remote, because Vizio Inc. is hoping to grab your attention with Amazon Video on their SmartCast TV platform.

With just a few taps of the remote, SmartCast TV users can access content from Amazon Video, along with other favorite apps such as Crackle, Hulu, iHeartRadio, Netflix, Pluto TV, Vudu and XUMO1 on the big screen.

Amazon Video allows consumers to buy or rent thousands of movies, while also granting unlimited access to thousands of titles, such as the Amazon Original Series and Movies such as Transparent, The Grand Tour and Manchester by the Sea and kids series Tumble Leaf. For new Prime customers, there is free 30-day trial to try out Prime Video.

"With the recent launch of SmartCast TV, one of the things we're most excited about is providing consumers with added entertainment options," said Matt McRae, Chief Technology Officer, VIZIO. "Amazon Video brings an array of content options to the screen, all accessible on the traditional remote via the Amazon Video button. We're glad to continue to bring in-demand content and solutions to our customers."

The addition of Amazon Video to VIZIO SmartCast TV gives consumers access to even more content options with features including select 4K Ultra HD titles on compatible displays featuring VIZIO SmartCast TV. Because the app is accessible directly from the display, Amazon Prime members can now easily access movies and TV episodes without the need for a separate streaming device.

To get started, you'll need the new 2017 remote featuring the V-button, which has a one-button access to the VIZIO SmartCast TV user interface, along with shortcut keys to top apps, including Amazon Video.

If you already have an eligible Vizo model TV and meet certain conditions, you can receive the new SmartCast remote free or for a nominal fee.