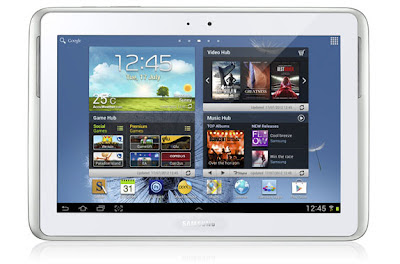 I believe Samsung Electronics of America might have a winner with the new Galaxy Note 10.1 tablet, which was announced on Wednesday and available for purchase the next day. That's about the shortest roll out of a product that I've seen.

So let's get right to it. The iPad is standing ready to defend any challenger and the Galaxy Note 10.1 just might be a threat, or at least earn a lot more respect than some of the other challengers like the Galaxy Tabs, the Motorola Xoom, the G-Slate and several other contenders.

Just to refresh your memory, the first Galaxy Note that arrived on the scene around February with a 5.3-inch display, was more smartphone than tablet. The Galaxy Note 10.1 seems to be more tablet than smartphone.

The Android 3.2 operating system, or Honeycomb, on the previous Galaxy Note is now Android 4.0, or Ice Cream Sandwich, on the new Galaxy Note.

The old and new share still share the unique S Pen stylus, but it has been redesigned on the Galaxy Note 10.1 to be more of an angular shape that doesn't roll off a table. The S Pen on the old device had only 256 levels of sensitivity, while the Galaxy Note 10.1 has 1,024 levels.

The new stylus is smarter in that it activates a task bar when it is removed from a slot in Galaxy Note 10.1 for access to S Note, Adobe Photoshop Touch and Polaris Office.

Samsung has given customers a treat with Adobe Photoshop Touch, which normally sells for $9.99. It is preloaded on this device and optimized for the S Pen to allow more control of brush sizes and opacity. Just like the full version of Photoshop, the Touch version offers features like layers, selection tools, adjustments and filters.

The multitasking feature is another big improvement worth bragging about on the Galaxy Note 10.1, which allows two different applications to run side-by-side. You can choose from a lineup that includes S Note, the Internet browser, video player, email, gallery or Polaris Office.

You would think that would be enough new features for the Galaxy Note 10.1 to attract attention from tablet shoppers, but Samsung kept going by adding the Kno e-textbook platform and a free Nook reading app. Then they threw in a two-year subscription to Dropbox, with 50 gigabytes of storage space. According to Samsung, that's a $100 value.

Samsung also added a Smart Remote app from Peel, a company intent on changing the way we watch TV. Samsung's idea here is to use the device to control a home entertainment system.

The new Galaxy Note 10.1 has a faster 1.4 gigahertz quad-core processor, compared with a 1.5 GHz-dual core on the earlier device. A 16 and 32 gigabyte model is available, whereas the earlier model was limited to only 16 GB.

The one surprise is that the rear camera megapixels on the Galaxy Note 10.1 decreased from 8 megapixels on the earlier Note to 5 MP on this device, which matches the iPad's camera. The two Note devices also share the same display resolution, which is 1280 x 800.

I won't say the Galaxy Note 10.1 is going to outdo the iPad. But I will say that among all the Android tablets available, it's going to be one of the strongest contenders.