Before autonomous vehicles can start shuttling passengers around, there are countless hours of testing performed in controlled environments and on real streets. The vehicles are put through just about every kind of conceivable challenge that might happen on busy byways.

One such autonomous testing facility is Mcity, located in Ann Arbor, Michigan, and claims to be the very first test site for autonomous vehicles under controlled conditions. Their mission is to deal with issues that autonomous vehicles are likely to be faced with in the real world, such as gravel roads, no lane markers, under-passes, and interstate ramps.

The Mobile Transportation Center (MTC) is a joint venture between the University of Michigan, state and local government, and partners in the automotive industry, such as General Motors, Honda, and Ford, as well as non-automotive companies like QualComm, APTIV, Denso, and State Farm. These researchers are teamed with academic faculty to explore “revolutionary automotive mobility.”

Outside of the Mcity region, there is a lot of autonomous vehicle testing in California, where the California Public Utilities Commission (CPUC) has oversight passenger carriers, such as buses, shuttles, limousines, and now, self-driving cars.

One of the leaders in the self-driving arena is Waymo, owned by Alphabet (Google’s parent company), and who was awarded the coveted CPUC permit to test autonomous vehicle passenger services. Waymo is also testing self-driving vehicles in Arizona and Las Vegas. Their vision is to develop a ride-hailing service with a fleet of robo-taxis.

A promising startup, Zoox, is also testing a robo-taxi service in San Francisco with hopes of being on the streets in 2020.

Another autonomous company taking advantage of their home turf is GM Cruise Automation, which is headquartered in San Francisco, but also on the streets of Manhattan in New York City, Scottsdale Arizona, and the Detroit area with self-driving vehicles.

It’s no secret that Tesla has been on the highways and byways of California for quite a while, and claims to be amongst the first companies to gain approval to test self-driving cars and just so happens to be in a captive market of car enthusiasts.

So if you’re in California, Arizona, Michigan, New York or a few other areas where AV testing is underway, check the rear view mirror for a camera-laden vehicle passengers, but no driver.

That’s the future of mobility.

BMW drivers can now turn their smartphone into their car key if they’re driving the latest X5 SUV or 8 Series Coupe.

These luxury BMW drivers will be able to unlock their car and start the engine with Digital Key using the “Near Field Communication” technology, also known as NFC. They’ll also be able to share their Digital Key access with up to five family members or friends, who'll use a four-digit code for access.

The process and verifications might seem a little intimidating at the beginning, as you’ll need several levels of authorization, the BMW Connected app, a Connected Drive account, and a compatible smart phone with NFC capability. At present, Android devices have been given the nod, such as the Samsung Galaxy family and the latest Note devices. Unfortunately, iPhone owners will not be able to play with the Bimmer’s Digital key system. But I’m sure Apple has something in the works.

To eliminate having to hand over your smartphone for valet parking or service technicians, BMW will furnish a key card that can be paired with the car using the charging tray in the BMW’s console.

The NFC technology has been around for several years and allows short-range wireless communication among electronic devices to share information and make transactions. If you have used mobile payments, such as Apple Pay, that’s NFC at work.

BMW is on the cutting edge of this emerging automotive innovation. 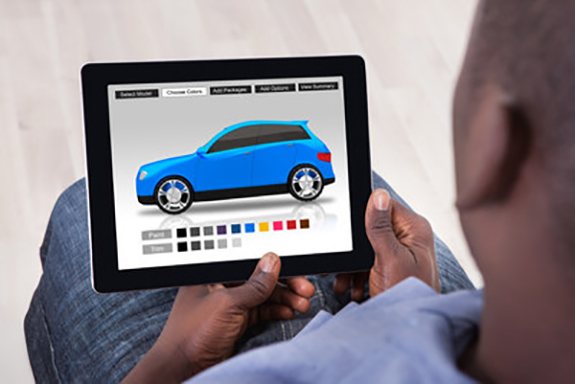 Get ready to buy a vehicle entirely online

There is a good possibility a near-future vehicle purchase will be conducted entirely online.

That’s according to a study by Frost & Sullivan concluding online sales of vehicles are expected to exceed one (1) million in 2020 and keep growing to over six (6) million by 2025.

The online vehicle purchasing model is expected to disrupt the traditional method of purchasing from retail dealerships. This innovative model will help manufacturers keep costs low and quickly introduce vehicles to the marketplace.

While this online method of purchasing a vehicle is expected to be favored by private buyers, other customers, such as fleet and corporate buyers, might still favor the traditional retail channel.

A new camera for law enforcement agencies from the Panasonic Corporation is their latest addition to its portfolio of public safety solutions.

The AS-1 Arbitrator is a forward-facing camera that is small enough to be mounted behind the rearview mirror in an officer’s vehicle. The camera has a wide-angle lens, one-touch record and an integrated impact sensor. It’s also engineered to function well in low-light and nighttime operations.

With this new camera technology for law enforcement, the bad guys are likely to be captured with optimal video evidence.

Finally, someone has developed technology to ease the mind of a vehicle owner on edge while waiting for a car or truck repair. Or most drivers just drop their vehicle off and hope for the best.

BOLT ON TECHNOLOGY, an automotive software development company, has tackled this issue by equipping automotive repair ships with the tools to improve communications between the customer and repair technicians.

Mike Risich, the founder and CEO, recognized the need and went about devising a way to communicate with car owners about the sometimes-nerve-wracking process of automobile repairs.

"We are pleased to participate in this award-winning program that educates viewers about key product and technologies that improve our everyday lives," says BOLT ON CEO Mike Risich. "Since day one, we have been committed to educating the automotive aftermarket about how technology can improve relationships between repair shops and their customers."

By using photos, videos and text messages, the auto repair professionals can help the customer to understand what is being done to their vehicle.

A syndicated documentary profiles the digital vehicle inspection software on PBS stations around the country. BOLT ON is using famed actor Rob Lowe to feature companies and industry professionals who are changing the world.