Shopping with the iPhone 5 Passbook app a pleasant experience 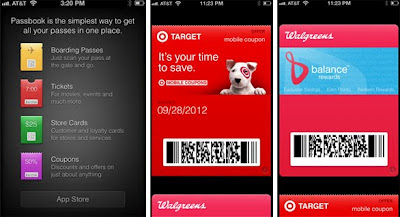 Update: Apple Inc. is releasing guidelines to developers for an "Add to Passbook" badge that can be incorporated into their apps and websites for devices running iOS 6.

After a few days with the iPhone 5, I figured it was time to go shopping with the Passbook app as my guide. This mysterious app included with iOS 6 will organize gift cards, coupons, passes, tickets and more, with the idea of making your wallet a lot thinner and lighter.

But it requires a few advance maneuvers before you head out to the store or look for your boarding passes. It's not as automatic as you would think.

The first thing the Passbook app will want to do is connect to the App Store through iTunes and this where things can come to a standstill a hurry, as there are numerous reports from iPhone 5 users about connection difficulties. You might see the dreaded "can't connect to iTunes" message.

I experienced the same problem with the Passbook app and iTunes, until I discovered some steps to change the time and date settings temporarily. That worked for me and I hope it works for any other iPhone 5 users having iTunes connection problems.

Once in the App Store, you'll find a rather short list of stores and other companies that are currently Passbook compatible. For my part of the country, Target and Walgreens were my choices, so I downloaded those.

But here is where using Passbook can get confusing, as the digital store cards are not automatically loaded into Passbook. In my case, I had to first sign up for the loyalty card using the store app and then you should see a "Add to Passbook" button in the app. Clear as mud, right?

I managed to get both Target and Walgreens cards into Passbook, where you can shuffle between them on the iPhone 5 display. As more cards are add, your thumb will get a workout shuffling for the right card.

I'm ready to go shopping, so let's jump back to the store app, or my case, the Walgreens app. I was able to see the coupons and weekly ads right on my phone. I zeroed in on a few items and added them to the built-in shopping list in the Walgreens app. Each coupon in the app has their own barcode that can be scanned by the cashier.

As I got near Walgreen's front door, the iPhone 5 determined my location and displayed a "swipe to access Walgreen card" as I entered the store. An audible alert would have been even better, but just having the visual notification was pretty slick. According to Apple Inc., if I was going to the airport, my boarding passes would pop up as I entered the terminal.

I wandered up and down the aisles in true guy fashion, looking for items on the shopping list. At this point in my shopping excursion, none of my grocery items chosen are loaded into Passbook. The selection of items and the shopping list is still within the store app.

When I made it to the cashier, this where I reached for the iPhone 5 instead of my wallet or key chain for a store card. I open up the Walgreens card in Passbook and handed it to the cashier for scanning. She was just as thrilled as I was that it worked and called it a "cool thing."

Now this where the Near Field Communication, or NFC, technology would have been handy, as I could have just paid for items by tapping my iPhone against a special terminal at checkout. But Apple has put NFC on the backburner for now; maybe it'll appear in the iPhone 6. So I pulled out my wallet for some cash.

In the meantime, NFC will be found on several iPhone competitors, such as the Samsung Galaxy S III and Victory and the upcoming Nokia Lumia 920, Motorola RAZR i and the HTC 8X. But the stores will also have to come onboard with the necessary terminals to handle NFC payments.

Although the number of participating retailers for Passbook is limited, it does work and I can't wait for my favorite grocer to join the list, so I don't have to give my phone number over and over and over. Having the store card in Passbook will be much easier and I won't lose it.

That wasn't a bad experience at all, so I say bring on more store cards for the Passbook app.