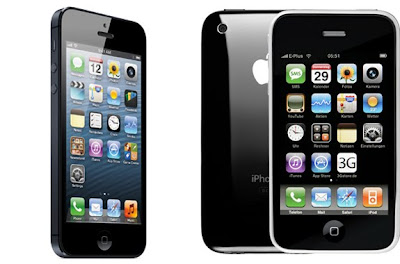 I joined the five million or more customers buying the iPhone 5 over the weekend. My longtime buddy since 2008, the iPhone 3G, has found a nice spot on the shelf. May it rest in peace as it gathers dust.

My 3G would no longer power off and I couldn't do a reset. The battery was about shot and the back panel was cracked. It would mysteriously make phone calls on its own accord to the person you last had a conversation with. The list of odd behavior goes on and on.

So the iPhone 5, although it's similar in design to the 4S, got my nod for having a larger 4-inch display, being thinner and lighter, while also being a lot faster with the A6 processor, compared with the 412mHz processor in my 3G. Throw in the eight megapixel iSight camera and the 4G LTE service and I'm the kid in the candy store.

The other determining factor is that the iPhone 5 was just a good deal for me. I paid the exact same amount of $199 for the 3G when it was released in 2008 as I did iPhone 5. But the 3G had eight megabytes of memory and the iPhone 5has 16MB. Apple began offering twice the capacity for the same price with the iPhone 3GS in June 2009 with 16GB model for just $199 and they also unveiled a new 32GB model for $299.

Now, it's great to check Twitter and Facebook with the built-in social networks integration while also exploring all the 200 new features in iOS 6. With the increased speed of the iPhone 5, most apps or Web pages now open between a walk from the couch to the refrigerator.

I did splurge on a protective case, but might not need a screen protector, thanks to the "fingerprint-resistant oleophobic coating" on the iPhone 5's display, which also combines the screen and touch sensors layer into one piece for a thinner profile. But I shouldn't be cheap and will probably purchase a screen protector when more choices are available the store shelves for the iPhone 5.

The big fuss about the smaller Lightning connector to replace the longtime 30-pin connector has not bothered me at all. I think we'll see the benefit of this change when the new accessories start to hit the market, such as docks and other devices. I also wouldn't be surprised if the logic behind moving the headphone port to the bottom also makes sense later. I have a hunch the audio port will be utilized in the new products when the iPhone 5 is docked.

I did experience the "rattle inside" that early buyers have been discussing in the Apple Support Communities' forum. But a trip to the Apple Store and the Genius Bar solved the problem. I'm rattle free now.

The Passbook app also needed some tweaking, as it wouldn't connect to the iTunes store. But after a bit of research, I discovered some steps that also got me on my way with the Target and Walgreens discounts apps in Passbook. The participating retailers worth a download will vary by your location and I imagine more will be added soon.

The Apple support forums are full of other concerns and issues about the iPhone 5, but they seem to vary from device to device and not all customers have the same experience. If you're researching a problem, the support forums would be a good place to start before heading back to the retailer. There might a trend among concerns and issues that Apple will need to address.

I think I made a good choice and I'm a happy camper so far.