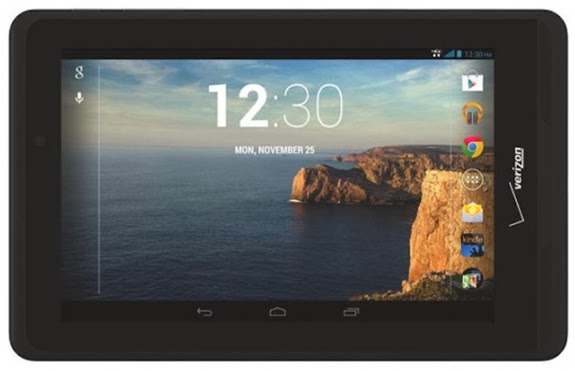 When the Ellipsis 7 tablet from Verizon Wireless arrived in my hands, I had a feeling that it could be a keeper. This is Verizon’s home-bred, in-house, call-it-their-own device and I could hardly wait to take it for a spin.

The first thing I did was to see if it would fit the inside pocket of my business jacket. Bingo, it did. So finally I had found a tablet that I could carry around without having to hold it my hands or place in a brief case. Just tuck it in my inside coat pocket and go.

The Ellipsis 7 is a 4G Android device running the 4.2.2 operating system, also known as Jelly Bean. It has a seven-inch display and front-facing speakers along the bottom that sound really good. Along the top of the device you'll find the headset port, which is where I think all headset ports should be located – hint, hint to the iPhone 5 designers.

Along the bottom is the USB mini port for charging, while the right side holds a MicroSD card slot, microphone, power and volume keys, along with the SIM card slot.

On the back is a 3.2 megapixel camera, which is probably the weakest link of the Ellipsis 7 features. But who takes serious photos with a tablet, so I didn't mind having a lesser-quality camera than some of the competing tablets. Having only 8 megabytes of memory could be also be looked at as a weak link, compared with other tablets in this category that are sporting an average of 16MB and tops out at 128MB for some tablets, such as the iPad Mini.

Setting up most email accounts only required a username and password, with the tablet doing most the behind-the-scenes setup. My Google and Hotmail email accounts were up and running in a matter of minutes. Setting up a corporate Exchange account was equally as easy, you’ll just need to pay close attention to your Domain and Server settings. I had Exchange mail arriving in under five minutes.

Although I have access to a Mac desktop, laptop, iPad and iPhone, I found myself using the Ellipsis 7 often to check multiple email accounts, conduct google searches and monitor my social media accounts. The speed of Verizon’s 4G network and the 7-inch size made this tablet quite handy. I especially like the front-facing speakers and the quality of the sound, which was great for YouTube videos.

During my time with the Ellipsis 7, I download several apps from the Google Play store without a hitch. Again, the fast network was the key for a smooth download process. This device also comes with several desirable apps installed, such as iHeartRadio, Flipboard, Amazon Kindle reader, and Redbox Instant for movies. The included Navigation app is also pretty handy.

The other tablets in the 7-inch display category have similar or better features, such as the Amazon Kindle Fire HDX, Google Nexus 7 and the Samsung Galaxy 3. Although they also might have more memory options or a faster processor, the Ellipsis has them all beat on price. At the current time the Ellipsis 7 can be a great holiday gift until Dec. 31 for $49 with a two-year contract, or for $249 if you don’t want to sign a contract.

When you think about a starting price of $329 for the iPad Mini with Retina display that can quickly rocket to over $800 loaded, or around $400 for a fully loaded Kindle Fire HDX, the Ellipsis 7 looks good for the budget and will satisfy most digital needs.

If you need more display area, the iPad Mini’s 7.9-inch display is very generous for a small tablet, but you’ll need to open your wallet a little wider. Or you can move up the 8.9-inch Kindle Fire HDX for a few more bucks.

But if the budget is tight, the Ellipsis 7 will take you anywhere you want to be in the digital world and perform like a champ for less cost. I’m call it a good deal.