Samsung unveils the Galaxy S IV in a show-like performance

Update: The Samsung Galaxy S IV is coming to AT&T, Sprint Nextel, T-Mobile and possibly Verizon Wireless soon. T-Mobile is offering an early-bird "sign up now" option to be notified for updates about the Galaxy S IV.

While the BlackBerry 10 platform had the spotlight for a while, The S IV will now bask in the limelight with a long list of innovative features. It did not disappoint us.

Right off the bat at the Radio City Music Hall event, Samsung President of Mobile Communications J.K. Shin took the stage and pitched the innovative feature of automatic scrolling and Smart Scroll/Pause using eye tracking, a unique feature among smartphones currently on the market. For example, a video you're watching will pause when you look away. 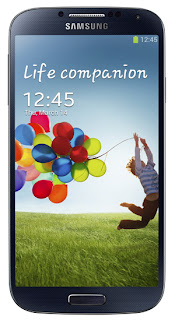 According to Shin, the Galaxy S IV is slim at 0.31 inches, or 7.9mm, and he refers to it as a "life companion." But it's still not quite as slim as the iPhone 5's 0.30-inch depth. It missed being among the thinnest smartphones by a hair.

But with a five-inch display and weighing in at around 4.6 ounces, 2.7 inches wide and 5.4 inches long, the Galaxy S IV joins other big-screen smartphones, such as the Motorola Droid DNA and the Sony Xperia Z. Only the Samsung Galaxy Note devices have larger displays at well over five inches. It has a 13 megapixel main camera and a 2 megapixel camera on the front. Both cameras can shoot video simultaneously, which might be an industry first and unique to the Galaxy S IV. Under the hood, you'll find a 2600 mAh removable battery that powers Android 4.2.2 Jelly Bean, running alongside two gigabytes of RAM and 16 GB of storage that can be expanded by adding a micro-SD card for up to 64 GB. 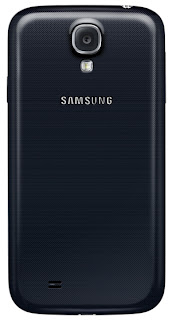 A unique photo-mortising feature will allow anyone taking a picture with the rear 13 MP camera to also insert themselves in the picture, which would be taken with the 2 MP front camera. Along the same lines, if someone walks through the background of your photo, they can be erased.

An S Translator feature on the Galaxy S IV will convert languages for travelers or anyone unfamiliar with a foreign language. The Galaxy S IV understands nine languages and supports text-to-speech to speech-to-text. It has translations for French, German, Italian, Chinese and other languages. Over 3,000 common and "useful" sentences also are included in the translation database that are not depended on a wireless connection if you're out in the boondocks.

Just like the BlackBerry 10 platform, the Galaxy S IV has a work space and personal space known as Samsung Knox that will separate business information from personal files.

This new device has a big bag of goodies and tricks. A Group Play music feature allows music sharing among eight devices. Air Gesture lets you navigate the phone without touching the screen. Air Call Accept allows a call to be answered by waving your hand. Adapt Display will adjust screen brightness based on what you're viewing. The build-in Near Field Communication, or NFC, works with HomeSync for cloud storage of all your stuff. Just a tap will keep the Galaxy S IV in sync with all the content.

The Galaxy S IV will come in Black Mist and White Mist colors and is expected to be available this spring on most of the major carriers.