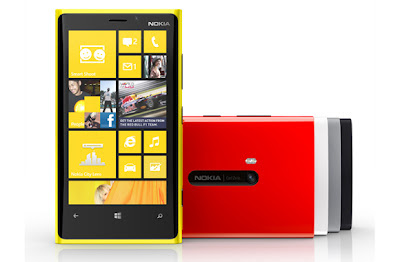 Nokia and Microsoft launched new Windows 8 smartphones today at a press event in New York. We can say hello to the Lumia 920 and 820 devices.

The two longtime technology powerhouses, who have been in a partnership since February 2011, vowed to use their "complementary strengths and expertise create market-leading mobile products."

The new Lumia 920 smartphone is chock full of new features, such as PureMotion HD+, wireless charging and Nokia's PureView camera technology, first seen on the PureView 41 megapixel phone announced earlier this year. The 920 will have a 8 megapixel camera.

This new device, shown in a new yellow color that Nokia says won' scratch off, is powered by a sizable 2000mAh battery and a Qualcomm 1.5 GHz dual-core Snapdragon S4 processor. It'll also be available in red and gray.

The live tiles in the Windows Phone 8 can be customized to show difference sizes for apps and other information that updates automatically. A new feature is the ability to capture screenshots and share them like regular photos and videos. A pinch and zoom feature is now available.

Probably the most unique feature for the Lumia 920 is the wireless charging and the accessories that support it. A "Fatboy" charging pillow, plates and stands will keep the 920 charged and ready to go. For music lovers, JBL Power Up wireless speakers headphones with Near Field Communication, or NFC, will require just a tap to transfer audio from the phone to speaker.

Nokia also announced that Nokia Music in the United States.

The Nokia Lumia 820 has many of the same features as it's more power sibling, such as NFC, City Lens and Carl Zeiss optics. The 820 is powered by a smaller, 1650mAh battery.

Nokia is banking on Microsoft's Windows 8 operating system to regain the prominence they once held in the mobile phones industry. While a few devices still use Nokia's longtime Symbian operating system, these new devices are hoping Microsoft's unique tiles display will gain traction among consumers who are also being bombarded with Android and iOS smartphone choices.

Samsung also is on-board with Windows Phone 8, as they announced their new Ativ devices last week. But some say they were only prototypes and the real devices are coming soon.

The Lumia 920 and 820 are the latest devices to get behind Microsoft's new mobile platform.

Now it's up to the consumers to give the new OS and the new phones a thumbs up.