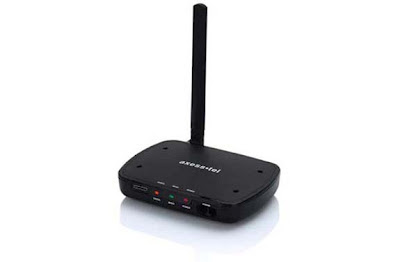 I've been making quite a few telephone calls lately using a traditional corded desk phone, which can also be called a landline phone. But it was not plugged into a wall jack.

This was possible with the "Home Phone Connect" service from C Spire Wireless, that looks like a Router or modem with unlimited local and long-distance calling

If you're interested in getting rid of your landline and keeping your household number, this device is up to the task. You'll need to follow the instructions closely, which include disconnecting the landline service from your home, before connecting the home connect terminal. According the device manufacturer, failure to do this could result in damage to the terminal or it may interfere with your existing phone service.

But if that scenario didn't scare you off, the home phone terminal has two RJ-11 ports - one to plug into the wall jack and another to plug a phone into the terminal. Once you're connected into your home telephone wiring, the terminal can support three additional phones connected to wall jacks anywhere in the house.

I choose to forgo plugging into my home wall jacks and just connected a desk phone straight into the home connect terminal. After connecting the power cord, a seven-inch antenna and my RJ-11 telephone cable from the desk phone into the terminal, I was ready for activation. The manual did skip over the activation number I needed to call, but a quick check with C Spire tech support got me dialing in no time.

A cell-phone like battery provides 2.5 hours of talk time in case of a power failure. The standby mode on a fully charged battery is rated at 10 hours.

I've been calling local numbers, 800 numbers, and actually took a few calls myself from various sources on the home connect terminal without a hitch. The only issue I encountered is that so-called "elevator music" sounds a little muffled while you're on hold. But the conversations were loud and clear.

This setup would be perfect for a home office, where you might need a separate telephone number that's different from the household number. You'll have the choice of porting your current home telephone number or using the new number issued with the home connect terminal.

This device is manufactured by Axesstel, Inc., a provider of fixed wireless products and 3G/4G gateway devices. It is being marketed by GetWireless, a national distributor of cellular-based products that include voice, fax and data.

C Spire is joining forces with these two companies to execute a "cut the cord" strategy for landline customers. Their plan is to give customer "one bill" for both cellular and wireless landline services.

Although I didn't encounter any hiccups with the wireless terminal, it does have a few limitations. It does not support home alarms, fax machines and dial-up modems. But it does have a unique solution for 911 service by using a GPS antenna, which is connected to the terminal and placed in a window or outside the home. According the terminal manufacturer, any emergency calls can be located via the GPS module.

According to C Spire, the $20 a month cost for the Home Phone Connect service, with a two-year contract, is about half of the cost of a traditional landline monthly cost. But there is a $49.99 device charge. Or you can pay around $160 for the device and also be free of a contract.

If you're a C Spire customer and looking for an economical way to make and receive phone calls, while also consolidating your home and wireless service into one bill, the home connect terminal is worth a look.

I liked the concept for this device and I like it even more after using it for a while.