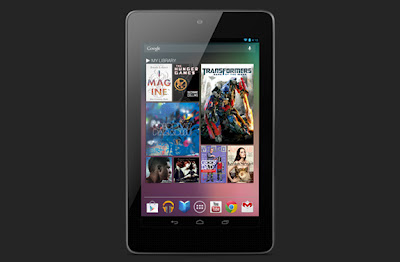 The Google tablet is no longer a rumor. Now we'll have the Google Nexus 7 by mid-July, or you can pre-order right now on Google's website for $199.

According to Google, pre-ordered tablets will ship in two-three weeks and for a limited time, you'll get $25 to spend in Google's Play store on apps, games, books and movies. Google is also throwing in a free copy of Transformers: Dark of the Moon.

The Nexus 7 will have a 7-inch display and weigh about 0.75 pounds, which is right in line with other tablets of this size. It'll use Android's latest operating system, which is Jelly Bean, or Android 4.1, if you keep track of the version numbers.

Google on their website has the battery rated for 10 hours of web browsing or 10 hours of e-reading, as well as over 8 hours of HD video playback.

The Nexus 7 was built to work with Google Play, or Google's app store, where they're pitching over 600,000 apps and games and over four million books. Online storage also is available at Google Play for 20,000 songs.

The big challenge for the Nexus 7 later this year will be if it can compete in the marketplace against all the other 7-inch tablets already on the shelves. It's a late arrival, while the Amazon Kindle Fire, the Nooks from Barnes & Noble, the Samsung Galaxy Tabs and the BlackBerry Playbook have a big head start.

The Kindles arrived in 2007, followed by the Nook in 2009 and the first iPad was announced in January of 2010. All the others quickly followed the iPad and have been trying to compete in a challenging tablet arena over the past couple if years.

The Nexus 7 just might have an advantage over the competitors with its Near Field Communication feature, or NFC. It'll have the "Android Beam" feature, which will allow the tablet to share information with other NFC enabled devices with just a tap. I imagine, the NFC capability will also allow the Nexus 7 to carry out mobile payments, purchase tickets and other wireless transactions.

Google announced at the Google I/O conference this week in San Francisco that more than one million Android NFC devices are shipping each week. So the Nexus 7 is on the cutting edge of this technology and that might the advantage that paints a bright future for Google's new tablet.

If you're itching for a Nexus 7, you can visit their website now. The 8 gigabyte model is $199 and the 16 GB model will cost $249. Both models have 1 GB of memory and are Wi-Fi only. You'll find a USB cable, wall charger and a quick-start guide in the box. A cover is available for around $20.

We should know around the holiday shopping season if the Nexus 7 is going to be a game-changer in the tablet arena.