Razer Phone is the smartphone built by gamers for gaming fans


The Razer Phone smartphone is now on the market as an Android device with hopes of taking mobile entertainment to the next level.

Developed by a company best known for their high-performance gaming hardware with over 35 million users, their first smartphone is designed with gamers in mind with a phenomenal display, cinematic audio and long battery life.

The new Razer smartphone will have to stack up against some of the current heavyweights in the market, such as the latest iPhone and Samsung devices.

According to the company, the Razer will measure up with a 120Hz UltraMotion display, which is no slouch in the gaming sector. Without getting too technical, this feature is based on the Qualcomm QuickChange 4+ technology and the improvement in the refresh rate is impressive on the 5.72-inch display.

For audio, the Razer is packed with Dolby Atmos technology, which has been labeled as the future of surround sound. It has roots in Hollywood on film sets starting around 2012, made its way into home audio equipment and now into the Razer smartphone. The Razer is promising a cinematic audio experience from the two front speakers with dual amplifiers. 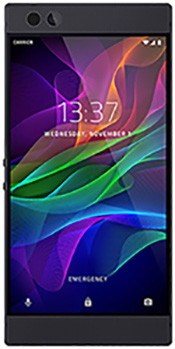 One odd quirk with the Razer is the lack of a traditional headphone port. But the Razer solved this with a USB-C to 3.5mm audio adapter, and according to the company, guarantees audiophile-quality sound using your regular headphones with the aid of certified THX technology, along with 24-bit DAC in the audio adapter. The Razer is serious about the audio capability, as Dolby and THX are two well-known powerhouses the audio industry.

Under the hood, you’ll find the latest Qualcomm Technologies Inc. Snapdragon 835 Mobile Platform, a 10-nanometer chip which also does duty in other flagship smartphones and Windows 10 “Always Connected” devices. To assist this processing power, there are eight gigabytes of RAM on board, which tops the rumored 3GB in the iPhone 10 and the 4GB in Samsung Galaxy S8.

As for all-day power, the Razer has a large 4,000 mAh battery and lays claim to having one of the largest in today’s smartphones and a rapid charging feature using Qualcomm’s “Quick Change 4+” technology. According to Qualcomm, a device can go from empty to 50 percent charge in just 15 minutes.

In the camera department, 12 megapixels is not too shabby for the Razer, especially with dual rear lens and dual-tone flash. There are lots of other smartphones that can’t match those specifications for picture taking and seamless zooming when needed.

The Razer is optimized for power users and the user experience can be enhanced further with the popular “Nova Launcher Prime,” developed by TeslaCoil Software, and running alongside Android 7 Nougat, the latest operating system for Android devices. But I hear Android 8 Oreo is just around the corner and according to company officials, the Razer will receive the Oreo upgrade in the spring of 2018.

The launcher prime software, available in the Google Play store, functions as a license to obtain the free Nova Launcher App to open the door for further updates and customization. Users can replace the home screen and modify icon themes, colors, layouts and animations.

To take advantage of the high-end audio features and processing power, the Razer company would like to invite users to watch movies on the Quad HD 5.72 display, listen to “expertly-tuned” audio and play games without concerns of running out of battery power.

“It’s common knowledge that I’m obsessed with my smartphones, I play a ton of games on them, and they’re my go-to for streaming content,” said Razer Co-Founder and CEO Min-Liang Tan. “We have wanted to make a phone with gaming-level tech for years, and the Razer Phone delivers in every way we imagined.”

Even If you’re not a hardcore gamer, you’ll probably find something to like about the Razer as a smartphone. The specifications are top-notch, with an attractive aluminum body and front-facing speakers. Just keep in mind this a first-try in the smartphone area for the Razer company and the best might be yet to come.

If you’re ready to shop, set aside around $700 and visit Razer's website and via this website on Amazon.