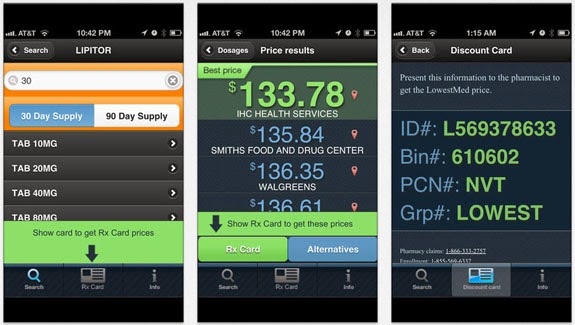 The smartphone is about to replace the computer and there seems to be an app for just about everything, including saving money on prescription drug costs.

LowestMed is a discount pharmacy program with a free mobile app for comparing prescription drug prices at grocery and pharmacy chains in a neighborhood near you, which includes Costco, Wal-Mart, Kmart, Walgreens Rite Aid, Kroger and several others. The app is designed to offer free and confidential savings for pharmacy plans, including plans under the Affordable Care Act and those who choose not to buy health insurance. Savings are estimated at 10 to 85 percent off retail prices for prescriptions.

To use the app, customers will simply type in their prescription info into the app for a quick comparison of prices for medications at local pharmacies. A discount card provided by LowestMed can also be used in over 60,000 pharmacies to save money on prescriptions. According to LowestMed, even if you have another insurance card, you may be able to get a better price using LowestMed.

As for privacy concerns, the company says customers do not need to enter any personal information and LowestMed does not track prescriptions..

LowestMed is available for iOS, Android and Windows phone devices. Doctors can apply for a free kit to help educate their patients and save on prescription drug costs.

Blackphone will have privacy, security, encryption as top features

With all the mess about cyber security of late, a smartphone that’s built from the ground up with privacy and security in mind sounds like a good idea.

That’s what Silent Circle, a secure-messaging company based in Washington, D.C., and Geeksphone, an emerging Spanish company, have in mind with the Blackphone.

The Silent Circle team has been working since 2011 to create the world’s first private encrypted communications network. The Geeksphone crew takes an open standards, open source approach with their handsets and have been doing work with a FireFox OS during the heavy lifting.

The Blackphone will be an Android device powered by a security-focused operating system called PrivatOS. It’ll be more than what’s inside your typical Android device, although the features should be the similar.

The firmware in the OS for the Blackphone will encrypt communication services and browse the Web securely through a private VPN service. According to Silent Circle, you’ll be able to send peer-to-peer encrypted texts, phone calls, video calls and file transfers from the Blackphone.

Developers are planning a top-notch processor for the Blackphone and it’ll be unlocked, which means it’ll be compatible with any GSM network, such as AT&T, T-Mobile and a slew of smaller carriers.

We’re not likely to get a peek at a real Blackphone until the Mobile World Congress conference, scheduled for Feb. 24-27 in Barcelona, Spain.

Until then, we can only speculate more Blackphone details and pricing.