New MacBook Pro certainly something to drool over 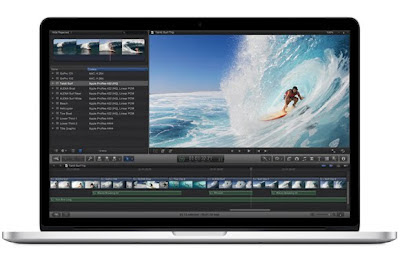 As of Monday, my MacBook Pro is no longer considered state of the art. I have only had it several months and I've been enjoying the all-aluminum body and snappy processor, along with the Snow Leopard operating system.

Now Apple Inc. has announced the very latest 15-inch MacBook Pro, which is a lot like my laptop in appearance, but it also has a Retina display and faster Intel Core i7 quad-core processors, along with flash storage. I can't compete with all that.

The new guy is sleeker, thinner, more powerful and certainly a looker. But is it better than what I have? Let's compare a few things.

It is powered by OS X Lion and can be upgraded for free to Mountain Lion when it's ready. I'll be sticking with the Leopard for a while.

Apple is also making a big deal about the two Thunderbolt ports, while I only have one. I'm left in the dust again.

The Thunderbolt port technology was developed by Apple and Intel to support "high-resolution displays" and "high-performance data devices." According to Apple, it's 20 times faster than with USB 2.0 and up to 12 times faster than with FireWire 800. This is a serious I/O port for serious business. We're talking about plugging in big LED monitors, RAID storage devices in a daisy chain and high-performance video equipment.

My problem with the one Thunderbolt port on my old MacBook Pro is that I have nothing that needs it right now. No high performance peripherals or components. Apple is hoping this technology gains traction in the future, but in the meantime, FireWire and USB ports are serving me just fine.

While we're on ports, I am kind of puzzled by the lack of a CD/DVD or Blu-ray drive on the new MacBook Pro. I also didn't see any ethernet or FireWire ports. I'm thinking a built-in optical drive is still needed for software installation, especially if purchased at retail outlets. My last purchase of a major application suite was still on CDs.

After some digging around Apple's website, I found where there are Thunderbolt port adapters for ethernet and FireWire peripherals. If you need a CD drive, it's available as an optional external drive for one of the two USB ports that "are" on the new MacBook Pro.

The Retina display on the new MacBook Pro is all about pixels and there are a lot of them - over 5 million to be exact, which is 3 million more than a high-definition flat screen television. The display is supposed to be stunning and I'll let you know just how stunning when I get a chance to see it. In the meantime, the LED-backlit display on my old MacBook is just fine.

My old MacBook and the new MacBook have the same glass Multi-Touch trackpad, so I'm still in the game with trackpad technology.

The one advantage my old MacBook Pro has is in the price. When I made my purchase several months ago, I was at around $400 less than the $2,199 starting price for the new MacBook Pro. If you want to get fancy with more memory and flash storage, get ready to shell out around $3,000. That's an "ouch" factor for a laptop.

I think I'm fine for at least another year with my current setup, but the new MacBook Pro is powerful and has the resolution for an impressive display. It's also pricey and seems to be targeted for high-end computing.

But I'll still go out to the Apple Store soon and drool over it.