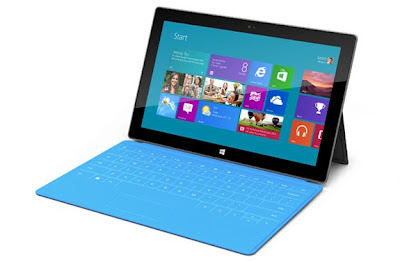 Microsoft choose Hollywood as the location to unveil Surface, a windows tablet computer designed and engineered completely by the guys at One Microsoft Way in Redmond, WA.

While the Surface is unique in appearance, with an integrated kickstand to help prop it up and a Touch Cover with a built-in keyboard, the big question quickly comes to mind. Is this tablet the iPad killer?

Various tablet manufacturers have been trying to build a serious iPad competitor since the Motorola Xoom arrived on the scene in early 2011. The Xoom wasn't it and neither were the Samsung Galaxy Tabs. The Acer tablets, Asus, the Amazon Kindle and a few others have gained traction, but the iPad remains on top.

Microsoft has probably thrown every punch they've learned in their 30-year history of building hardware and developing software to make the Surface attractive to savvy consumers. It even has a few strong point and features not found in the current crop of tablets and can one-up the iPad in a few areas.

Although Microsoft did not list physical dimensions, they did point out the Surface's 10.6-inch display with a 16:9 ratio. I'm afraid the iPad stops at 9.7 inches in the display size, while other tablets, such as the Xoom 2, Acer Iconia Tab and Asus Transformer Prime stop at 10.1 inches. So the Surface holds the top spot for display size.

The Surface is about the same thickness as the iPad and the weight is around 1.5 pounds, but that's iffy, depending on configuration and what Microsoft calls the "manufacturing process."

Perhaps the most "talked about" feature of the Surface will be the Touch Cover, which will be available in five colors. It will attach to the Surface with a magnetic latch, which reminds me of the iPad's magnetic cover. But the Surface has a keyboard on the inside of the cover, which could be a stroke of genius for Microsoft if consumers give it a nod.

I can't wait to get my hands on the VaporMg casing, which Microsoft is saying will feel like the finish of a luxury watch.

It seems that devices of late are all going with high-end materials on the outside. Apple likes aluminum and some of the Ultrabooks are even using glass, such as the HP Envy. A technique using Liquid Metal is being tossed around for the iPhone 5. So maybe the VaporMg technology, which has a dose of magnesium, will ensure Microsoft's Surface is in the game of hi-tech casings.

It's no surprise that the Surface will be powered by a couple of versions of the Windows 8 operating system, which has been on the market in preview form for desktop computers. You'll be able to choose between Windows RT for ARM processors or Windows 8 Pro for Intel processors.

I've been testing Windows 8 Consumer Preview on a desktop and it'll be interesting to see how this OS performs on a tablet.

As for ports, the Surface will have HDMI and a full-sized USB 2.0, along with a micro SD slot. That's not a bad start for a tablet, which will also be available in configurations of 32, 64 and 128 gigabytes. The latter is only for the Windows 8 Pro version.

If you're itching to try Microsoft's latest creation, you'll just have to wait awhile. They still have to figure out how much it'll cost. I imagine it'll be ready for the shelves sometime this fall, or surely in time for holiday shopping.