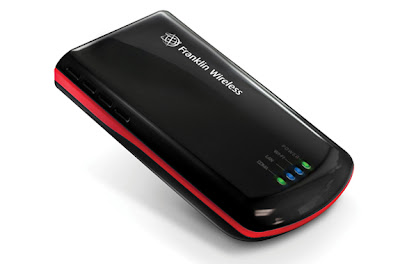 The first thing you'll usually look for is a Wi-Fi signal when you're out and about with all your digital devices. In most cases a data plan will take care of your Internet connection for your smartphone and maybe your tablet, but a strong Wi-Fi is generally preferred because it's faster and cheaper.

I've found a good "on-the-go" Wi-Fi signal with the Franklin Wireless mobile hotspot that is available from C Spire Wireless. The first thing you'll notice about the Franklin mobile hotspot is the small size. I was expecting something about the size of the box, but was surprised to see a device less than one-fourth the size of the package it arrived in. It'll remind you of a small mobile phone and it's a handy size for carrying around. The light weight at 2.46 ounces is also a plus when transporting it in the carrying case that's included in the box. Overall, the Franklin mobile hotspot device is small, but it has quality feel to it.

The Franklin mobile hotspot is unique in that it has a RJ45 Ethernet port, just in case you have to connect the mobile hotspot to your desktop or laptop computer with an Ethernet cable. I tried it on my desktop computer and it worked flawlessly, as I could tell no difference between the Franklin hotspot wired connection and being connected to my Internet router via a wired connection.

To help with heat, the device has built-in cooling vents on each side above the red what I'll call "racing stripes." In other words, it's a rather snazzy-looking device, as well as a solid performer.

I put the Franklin mobile hotspot though the wringer around the house, without so much as hiccup. At one point, I had an iPhone, iPad, MacBook, iMac and a Nook Color e-reader all connected to the Franklin's Wi-Fi signal. The specifications say "up to five devices on the go" and I can vouch for that.

You can keep track of what the Franklin mobile hotspot is doing by observing the four LED status lights that indicate power, the Wi-Fi signal, an Ethernet cable connection and a CDMA network.

Another unique feature about the device is the removable 1350 mAh battery, which is about the size of some mobile phone batteries and is rated at three hours of use with only one device connected to the Wi-Fi. Charging is handled via a mini-USB port.

If the device needs a reboot, a handy reset button is underneath the battery cover, but you don't have to remove the battery. That's a good thing.

During an "on-the-road" test at the International CTIA Wireless show in New Orleans, I was hoping the Franklin mobile hotspot would enhance my W-Fi problems. But there was just something about all the brick and concrete in the Ernest N. Morial Convention Center that was wrecking havoc on Wi-Fi signals. Even the Wi-Fi signals provided by the convention facility was spotty. So I can't ding the Franklin device alone on this, as it was tough environment for wireless connections.

My only complaint about the mobile hotspot is that the RJ45 Ethernet port cover is not hinged to the device. It's a small plastic cover that you're sure to lose.

If you're thinking this device might fit your needs, you would normally need around $130, but keep it in your pocket and pick up the Franklin Wireless mobile hotspot at cspire.com for free with a two-year contract for a data plan.

​It's small, reliable and a good source of Wi-Fi for multiple devices. I enjoyed having it around.