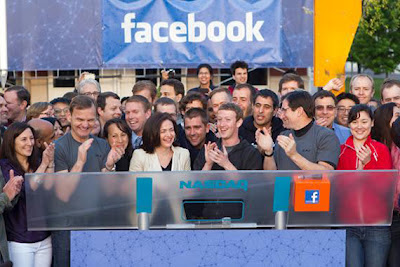 Now that we know Facebook has a market value of $104 billion, the next sixty-four thousand question for some of us will be should I buy stock.

If you can answer that question successful, in several years you could be very rich. Or you could be the Facebook fan who lost their shirt.

If you're thinking about it, maybe a closer look at this fairy-tale company will help sway your mind. There is a lot behind the simple "Like" button and your updates.

Facebook has been around since 2004, when it was founded by current CEO Mark Zuckerberg, along with a few other Harvard University technology wizards.

Who would have known that Zuckerberg, now a newlywed as of Saturday, would grow Facebook into one of the world's top social networking websites, which has around 11 offices in the United States, with main digs being in Menlo Park Calif., and 18 or more offices scattered around the globe.

You'll probably be surprised to find out, that according to Facebook's website, 80% of monthly users are outside of the U.S. and Canada. So maybe that's why they need almost twice as many international offices as they have U.S. offices and felt compelled to make Facebook available in more than 70 languages.

So if Zuckerberg wanted to brag, he could go on for hours about how he started in a dormitory room and now runs a company worth a lot of billions. But according to Zuckerberg, he just simply wants to "make the world more open and connected."

But there is another sixty-four thousand question looming that has to do with whether Facebook can be montetized going forward to satisfy the investors appetite for profits. Now Facebook will have face the heat when monthly, quarterly and annual financial reports come around.

I imagine, like all other Internet-based companies, Facebook will rely on advertising and maybe – are your ready – user fees at some point. The latter is my thinking only, but with the emerging trend of paying for digital content, I wouldn't put it out of the question.

If Facebook ask us to reach for our wallets at some point, I imagine some of the 901 million fans would scatter to other social networks or suddenly decide that updating your status for all to see is not as crucial as it once was.

I don't update my own timeline enough, but I like what others are doing with their updates, the 300 million photos that are uploaded daily and other social aspects of their lives. It's very entertaining.

Facebook is likely to continue to grow by snapping up innovative companies like Instagram, a photo-sharing service and most recently, Karma, which is built around notification of important events and instant gifts.

At this point, I'm bullish on Facebook, with is easy for me to say, since I'm not an investor or shareholder and passed on any of the 180,000,000 shares of stock that Facebook was offering. But they had a decent opening day on Friday and finished slightly up at $38.23 rather than down from their initial offering price of $38.

Everyone will be watching what happens today, the rest of this week, and the months and years ahead.