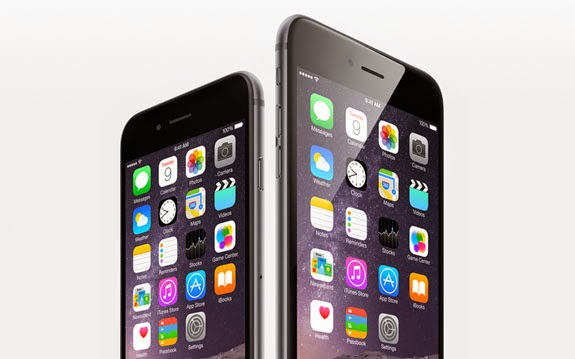 Apple appears to have done it again with the debut of the iPhones 6 and 6 Plus. With much fanfare Apple kept the "wow factor" going with the seventh generation of the iPhones that will be available with a 4.7-inch display for the iPhone 6 and 5.5 inches for the Plus model.

Apple is calling the new iPhones the "biggest advance in the iPhone design since the original iPhone," which was introduced in in 2007.

The specifications for the iPhone 6 has been leaked to the hilt over the past several months and there wasn't much left for Apple to announce. But it's just good to get a look at the new, larger iPhone with rounded corners and many new features like an A8 processor with 64-bit architecture, M8 Motion Processor and a new health app. The A8 chip is smaller then previous processors, but also faster with better graphics.

The camera for the iPhone 6 and 6 Plus is now 8MB and seems to protrude a little from the backside. It also has Autofocus with Focus Pixels, more advanced video capabilities and a new time-lapsed mode. The Plus model comes with Optical Image Stabilization.

Perhaps the biggest news of all and something that Apple fans have been waiting for is the inclusion of the Near Field Communications, or NFC, technology. According to Apple, when shopping and it's time to pay, you'll just hold your iPhone near the retailer's contactless reader with your finger on Touch ID" for a one-touch experience. The merchandise can be charged to one of several participating banks, such as American Express, Bank of America, Chase and Capitol One.

The NFC technology has been around in Android devices and certain other smartphones for a few years, but has failed to gain much traction in the retail arena. Maybe the new iPhones with the Apple Pay feature will bring some much-needed life to mobile payments.

Among the many unique features that the Touch ID sensor will offer, the one that caught my attention is the ability to approve purchases from iTunes, iBook and the App store without having to enter your password. Just a press of the finger will get the job done. To that, I say "hallelujah," as I have too many passwords to remember.

The new iPhones are designed to work seamlessly with your Mac by using iOS 8 and the Mac's OS X Yosemite. The Handoff feature will allow users to share file in Mail, Safari, Pages, Numbers and other applications. You'll also be able to answer calls on your Mac or iPad and send video or text messages from any iOS device.

Apple had bragged about the previous iPhone 5 being the world's thinnest phone at 0.30 inches in depth and the iPhone 6 can keep the bragging rights by showing up at only 0.27 inches thick. So it looks like the Samsung Galaxy line of S devices, such as the Galaxy S5, with a thickness of 0.32 inches, will have to keep a back seat for a while longer in the slim competition. As for the weigh-in, the iPhone 6 wins again at only just over 4.5 ounces, while the Galaxy S5 could only slim down to 5.11 ounces.

I'm sure no one is surprised that the Dr. Dre line of Beats headphones are available as accessories for the new iphones. You'll be able to choose from Over-Ear headphones, a Dr. Pill XL Speaker and Powerbeats In-Ear headphones. A couple of specially designed leather and silicone cases are available.

As expected, the iPhone 5 will run on AT&T, Verizon Wireless, Sprint and T-Mobile with VoLTE support. C Spire has also announced that it well offer both models when available. Some carriers are offering a free iPhone 6 if customers sign a new two-year contract.

All of the new features in these iPhones, such as the enhanced Touch ID Sensor, health and fitness tracker and Apple Pay will be enough to keep you standing in line at the Apple stores.

Time will tell if Apple has a couple of champions in their corner with the larger iPhone 6 devices. I'll call it early; they are winners.